The results are in: global, science-based regulators, risk assessors, universities and published research data all overwhelmingly agree that Glyphosate is safe. Despite this, in recent months concerns over the use of the herbicide glyphosate have hit the media leading to alarmist and significantly misinformed commentary regarding its safety.

User and consumer safety is CropLife Australia’s top priority when considering agricultural chemicals and we welcome the public interest in glyphosate. However, it is critical that the debate is informed and based on independent scientific evidence.

Download: A4 factsheet on commonly asked questions about glyphosate

Download: A3 poster on commonly asked questions about glyphosate

Facts and science must prevail

Research confirms glyphosate-based products are safe. Over 800 scientific studies and independent regulatory safety assessments support the fact that glyphosate does not cause cancer or environmental harm.

Australia’s own independent regulator, the Australian Pesticides and Veterinary Medicines Authority (APVMA), examined glyphosate in 2016 and found no grounds for its approved uses to be reconsidered. 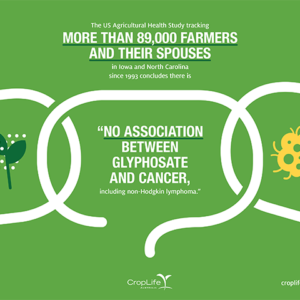 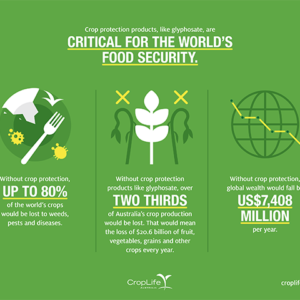 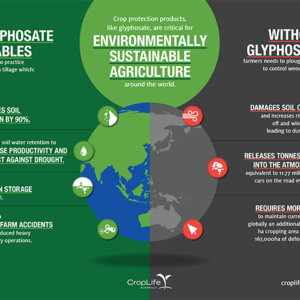 Glyphosate is a broad-spectrum herbicide which works by inhibiting an enzyme found in plants. Glyphosate is the most widely used herbicide in the world, with around 500 products containing glyphosate registered for use in Australia, from home gardens through to commercial farming operations.

In 2016 the expert ‘Joint Meeting on Pesticide Residues’ (JMPR) met to discuss glyphosate. The JMPR brings together the Food and Agriculture Organization of the United Nations Panel of Experts on Pesticide Residues in Food and the Environment and the World Health Organization (WHO) Core Assessment Group on Pesticides. Together, the JMPR conduct scientific evaluations of pesticide residues in food and determine whether they pose any health risks to humans.

The JMPR’s scientific evaluation concluded that glyphosate is unlikely to pose a carcinogenic risk to humans. Further, the JMPR found it was not necessary to establish an acute reference dose because of glyphosate’s low acute toxicity.

Aloe vera, pickled vegetables, coconut oil and several key agents used in chemotherapy treatment are all on the IARC lists of possible or probable carcinogens. From over 1,000 scientific assessments, the IARC has only ever found one substance to be ‘probably not carcinogenic’.

The IARC is not a scientific agency. It plays a role in advising regulatory bodies on potential hazards, allowing the relevant regulatory agencies to consider if there are any associated risks and manage them appropriately. It must be noted that the IARC association with non-Hodgkin’s lymphoma, by their own description, was tenuous, limited and intended to be directed to the spray operator, not casual environmental exposure to bystanders or consumers.

Before any agricultural chemical product can be sold or manufactured in Australia, it goes through rigorous scientific assessment by the APVMA. The APVMA assesses the safety and expected use of the product. In 2016 the APVMA examined glyphosate, following the release of IARC’s report, and found there were no grounds for its approved uses to be reconsidered.

In fact, every independent, science‑based regulatory agency globally (including; Germany, New Zealand, Canada, the United States and the European Union) has comprehensively evaluated glyphosate and found it safe to use in accordance with label directions.

What do independent science regulators say?

“EPA continues to find that there are no risks to public health when glyphosate is used in accordance with its current label and that glyphosate is not a carcinogen.”
April 2019

“The draft human health risk assessment concludes that glyphosate is not likely to be carcinogenic to humans.”
December 2017

“No convincing evidence of potential interaction with the estrogen, androgen or thyroid pathways”
June 2015

“The AGG proposes that classification of glyphosate as for germ cell mutagenicity genotoxic or mutagenic is not justified.”

“The AGG proposes that a classification of glyphosate with regard to carcinogenicity is not justified.”

“The AGG proposes that classification of glyphosate as toxic for reproduction is not justified.”

“The AGG proposes that classification for specific target organ toxicity is not justified, neither for single nor repeated exposure (STOTSE and STOT-RE) respectively.”

“For all proposed uses, a safe use could be demonstrated for operators and workers (both without personal protective equipment) and for bystanders.”

“No pesticide regulatory authority in the world currently considers glyphosate to be a cancer risk to humans at the levels at which humans are currently exposed.”

“Based on a wide-ranging review of scientific evidence, the committee again concludes that classifying glyphosate as a carcinogen is not justified.”

“RAC concluded that the available scientific evidence did not meet the criteria to classify glyphosate as a carcinogen, as a mutagen or as toxic for reproduction.”

“Moreover, it was concluded that animal testing found no carcinogenic association and health risk of glyphosate on farmers was low. … A large-scale of epidemiological studies on glyphosate similarly found no cancer link.”

“Glyphosate is not genotoxic and is unlikely to pose a human cancer risk.”

“Glyphosate is unlikely to be genotoxic or carcinogenic”

“Glyphosate had no neurotoxicity, carcinogenicity, reproductive toxicity, teratogenicity or genotoxicity.”

What do the experts say?

“Glyphosate is the world’s most widely used herbicide, largely due to its relatively low environmental toxicity and its broad-spectrum control of almost any weed. Its safety and usefulness are particularly evident when compared to other, more harmful, alternatives.

Safety is relative and glyphosate is one of the safest broad-spectrum herbicides on the market.

It is not enough to only look at glyphosate in terms of its safety in humans. Glyphosate has been instrumental in driving no-till farming which has significantly reduced carbon emissions and labour inputs.

Where broad acre farming is concerned, glyphosate is absolutely critical in maintaining sustainable practices.”
The University of Adelaide

“The epidemiological evidence that glycophosphates are associated with an increased risk of lymphoma is very weak … From a purely scientific point of view I do not think that the judgement makes sense.”

“These medico-legal cases are always difficult to make because the concepts of risk and cause in a scientific sense are different to those concepts in a legal sense.”
The Guardian

“Residues in food are so low for all chemicals and glyphosate too, that there is no cancer risk.”
ABC

“And then there’s the even lesser risk of cancer from residual glyphosate, which has never been documented. Just forget it.”
The Conversation

“Science is not besotted by court cases and the actual scientific evidence we have shows that that link is not apparent at the concentrations humans use, under the conditions human use it.”
ABC

“My view and the view of most biological scientists and toxicologists is [when] used properly, it’s not dangerous”

“In fact, the largest study of agricultural workers who use glyphosate showed no association between glyphosate and cancer.”
Channel Ten: The Project

“Glyphosate has been tested in a very comprehensive package of toxicology studies, on multiple occasions … and consistently glyphosate is not a carcinogen in animal studies.”
ABC

“If there were to be carcinogenic we would expect that such cancers would be in epidemic proportions these days, given its widespread use,”

“The world is moving towards nine billion people in a few decades. We depend on biotechnology and glyphosate to be able to feed them,”

“Fake news serves us poorly. As Academy of Science Fellow Dr TJ Higgins once said ‘red herrings are in plentiful supply but they will not feed nine or 10 billion people’. GM (genetic modification) and glyphosate, however, just might.”
The Daily Liberal

Glyphosate, like all crop protection products, plays a critical role in environmentally sustainable farming practices around the world.

The application of glyphosate eradicates pests without having to disturb the soil and disrupt the weed’s roots via tillage. It is scientifically proven that conservative tillage, enabled by glyphosate, can reduce soil erosion by up to 90%, significantly improve water retention and increase/maintain carbon storage.

The responsible use of herbicide products, such as glyphosate, is crucial to global food security. Glyphosate is an essential tool for our Australian farmers to be productive in an environment that is under constant threat of weeds.

The fact is over two thirds of the food on your plate and the beer or wine in your glass exists because our farmers have access to safe, modern crop protection products.

Without crop protection, up to 80% of the globe’s crops could be lost to weeds, pests and diseases. With the global population set to approach 10 billion by 2050, this is a result that would plunge the world into a hunger crisis.

Does glyphosate cause cancer?

Should we freak out that a common herbicide is ‘probably carcinogenic’?

A top weedkiller could cause cancer. Should we be scared?

Consider closely the question of risk

There is no evidence that the weedkiller glyphosate causes cancer

Glyphosate use and cancer incidence in the Agricultural Health Study

Ban on weedkiller glyphosate won’t save anyone from cancer

Glyphosate epidemiology expert panel review: a weight of evidence systemic review of the relationship between glyphosate exposure and non-Hodgkin’s lymphoma or multiple myeloma